After many years of training at regular gym’s which included classes such as Spinning, Body Pump & Circuits, I felt as if my training had become static and to be honest had become boring and a bit of a chore.

My son had been training at Crossfit Barbaric for just over a year and I had seen the results that Crossfit had given him and he had been trying to get me to do my Fundamentals and try it out, after some persuasion I finally gave it a go around Christmas time 2017.

On arrival I was met by Joel Bennett, one of the instructors who was going to take me for my Fundamentals. Joel was very professional and put me at ease straight away and explained and demonstrated all the movements / exercises that I needed to know in order to start my Crossfit journey

Although some of the movements were out of my capabilities, I was instructed on how to scale the movement in order that I would be able to join the sessions and this makes Crossfit accessible to everyone.

On my first Crossfit session I was a little nervous / apprehensive, but I shouldn’t have been. I was met by Simon Murray (Crossfit Barbaric Manager / Instructor), who once again was very professional and explained everything in great detail before we started.

All the members are really friendly and make you feel welcome right from the start and you soon feel part of the group.

I have now been training Crossfit for about 3 months and have attended Crossfit / Metcon & Barbell classes and even entered a team Crossfit competition open to all levels, which was a brilliant experience.

I can already start to see and feel the results both in my flexibility / strength and body shape, to be honest I feel the fittest that I’ve been in the last ten years.

Having now mastered some of the movements that were out of my capabilities initially and am looking forward to the next challenge learning some new ones.

I actually look forward to training again, which is something that I wouldn’t have said over the last few years
If you’re looking at changing your training or starting out, then I highly recommend that you try Crossfit Barbaric, not only to improve your fitness and well-being but to meet new friends and have a great time.

I am not going to tell you my age, I leave that for you to guess which one I am in the photograph, but it won’t be too long before I will be getting my shirt off lol. 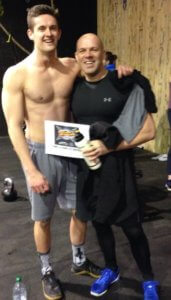